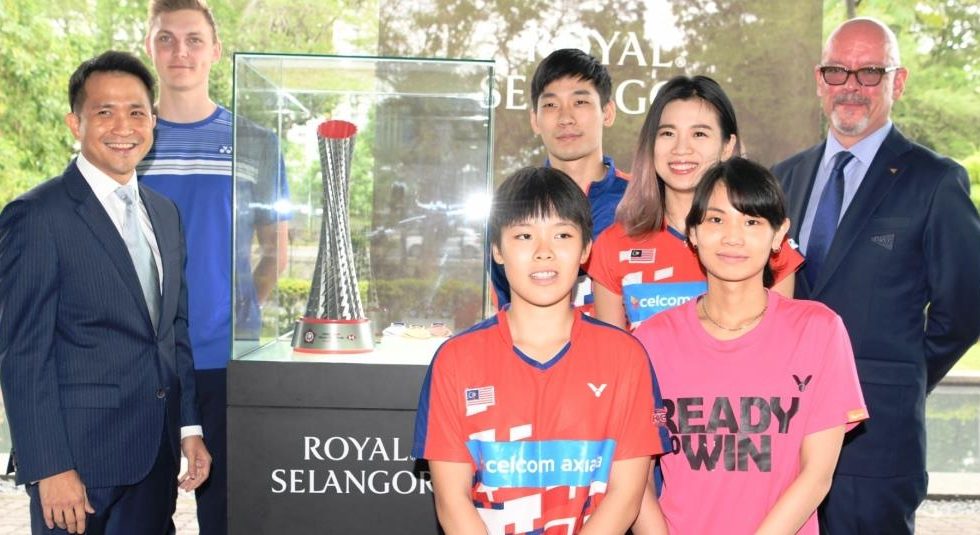 This revelation came at today’s Unveiling Ceremony of the HSBC BWF World Tour Finals Trophy at the Royal Selangor Visitor Centre in Malaysia.

Welcoming Royal Selangor to the international badminton family, BWF Commercial & Communications Director Owen Leed cited the company’s “iconic status as one of the Malaysia’s most recognisable and respected brands”.

“As a global sports federation based in Malaysia, BWF is pleased to partner with Royal Selangor in this significant venture. Known for its amazing creations from pewter, Royal Selangor will produce 14 large trophies for display on the television court at the Finals, Super 1000, Super 750 and Super 500 events. Additionally, there will be 32 smaller trophies for the winners for the next four years and 32 runners-up plates. Royal Selangor also produces the medals for all BWF Major Events,” elaborated Leed.

Royal Selangor Executive Director Chen Tien Yue states: “Royal Selangor is excited to be the Official Trophy Partner of the HSBC BWF World Tour Finals. We’ve been working with BWF since 2017 for their medal needs, and we have just taken the relationship further by signing this new partnership. This iconic HSBC BWF World Tour Finals trophy is unique to host city Guangzhou and we are just as proud of it as any trophy we have designed and crafted for F1 races or ATP Masters tennis tournaments.” The HSBC BWF World Tour Finals Trophy has been exclusively crafted for BWF’s year-end showpiece in Guangzhou, China, that will host the eight top singles players and doubles pairs on the HSBC Race To Guangzhou Rankings. The design of the trophy for the HSBC BWF World Tour Finals 2018-21 is inspired by the iconic Canton Tower. The spiralling open lattice structure with its graceful silhouette is captured dynamically in pewter, paying homage to the tower that has come to symbolise Guangzhou’s status as a modern, vibrant city.

The trophy received the seal of approval from star players, Viktor Axelsen (Denmark), Chan Peng Soon, Goh Liu Ying and Goh Jin Wei (Malaysia), and Tai Tzu Ying (Chinese Taipei) – all of whom were in attendance and who are aiming to qualify for the Finals and to get their hands on the status symbol of on-court supremacy.

“These trophies are beautiful and befitting of the Finals which is the most prestigious event on the Tour. I will definitely be working hard to reach the Finals in December and I hope to be lifting one of these trophies at the end,” said world No.1 Men’s Singles player, Viktor Axelsen.

Following the Unveiling Ceremony, guests were invited to tour the Royal Selangor Visitor Centre and create their own personal pewter souvenir.