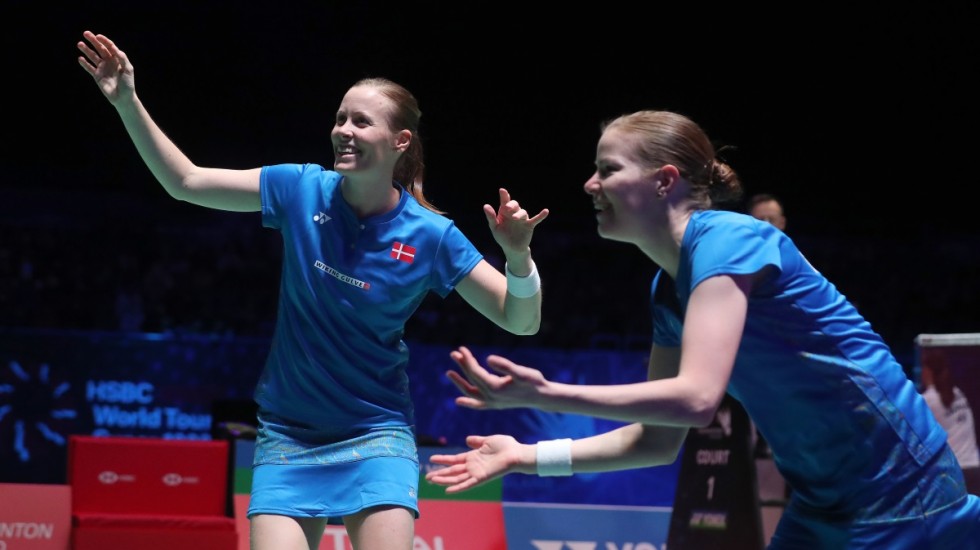 The first quarter of the year couldn’t have gone any better for Christinna Pedersen and Kamilla Rytter Juhl.

With two title victories and two semi-final finishes, the Danes (featured image) are flying high – and leading the HSBC Race to Guangzhou rankings in Women’s Doubles. Pedersen and Rytter Juhl won the Perodua Malaysia Masters, were semi-finalists at the Daihatsu Indonesia Masters and the Yonex-Sunrise Dr. Akhilesh Das Gupta India Open, before achieving one of their career’s most memorable trophies – the long-awaited Yonex All England Open crown. The Danes have accumulated 34,040 points – nearly 4000 points clear of the second-placed Jongkolphan Kititharakul and Rawinda Prajongjai of Thailand.

The Thais have played five of the seven HSBC BWF World Tour events so far this season. They started the year on a perfect note, winning the Princess Sirivannavari Thailand Masters at home; were quarter-finalists in Indonesia; runners-up in India, before once again making the quarter-finals in the Yonex German Open and the All England.

In third place are Japan’s Yuki Fukushima and Sayaka Hirota, champions in Germany and runners-up at the All England. The other Japanese pair in the top ten is Misaki Matsutomo/Ayaka Takahashi (No.7), who were champions in Indonesia.

Two other Japanese pairs – Mayu Matsumoto/Wakana Nagahara and Shiho Tanaka/Koharu Yonemoto – are in joint 19th place. Both have played only two tournaments so far, and can be expected to move up the rankings as the season progresses.

Indonesia have done well with three pairs in the top ten. At No.5, below World champions Chen Qingchen/Jia Yifan (China), are Della Destiara Haris/Rizki Amelia Pradipta, who were quarter-finalists in Thailand, Indonesia and India.

India Open champions Greysia Polii/Apriyani Rahayu are in eighth place, while compatriots Anggia Shitta Awanda/Mahadewi Istirani Ni Ketut, who were runners-up in Thailand, are in ninth.

China’s Chen and Jia are yet to hit peak form, with their best performance so far being a runners-up place at the Malaysia Masters. Since then their results have been modest by their high standards.

Consistent Korean duo Lee So Hee/Shin Seung Chan are sixth with 21,110 points thanks to semi-final finishes in Malaysia and Indonesia; while Denmark’s Maiken Fruergaard/Sara Thygesen are at No.10 with 16,140 points. Bulgarian siblings Stefani and Gabriela Stoeva are currently in 11th place, but they will rise in the rankings as they won the Orleans Masters – a BWF World Tour Super 100 event – on Sunday.