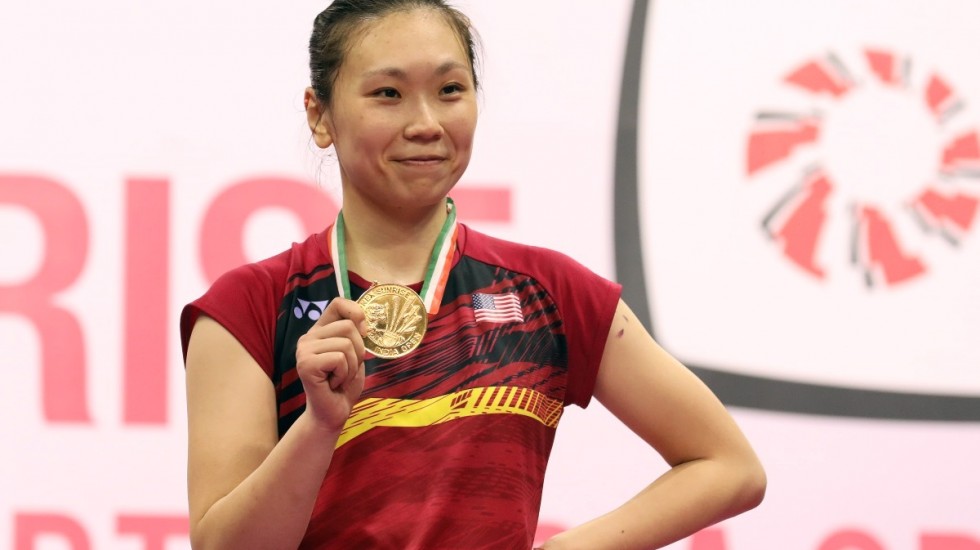 Beiwen Zhang’s day in the sun came on the back of a courageous, 69-minute humdinger that broke the hearts of local fans at the Yonex-Sunrise Dr. Akhilesh Das Gupta India Open 2018 today.

At the opposite end was defending champion Pusarla V Sindhu, who nearly capped a brilliant late-match fightback to bring the tournament to a climactic end. Down 17-19 in the third, the defending champion showed the tenacity she’s renowned for, producing three winners to have championship point.

Pusarla was on a euphoric spell, riding the energy of the crowd; a fairytale end to the tournament was unfolding for the crowd and it took all of Zhang’s stubbornness and athleticism to break that momentum and extract the two crucial winners at the very end: 21-18 11-21 22-20.

“I know my weaknesses and I try to cover a lot. When I got a chance, I was hitting smashes. Normally, if you watch my game, I don’t really smash a lot. I played like an attacking player today,” Zhang said.

The Women’s Singles battle closed out the 2018 edition of the India Open on an eventful day that saw Indonesia grab two titles (Men’s Doubles and Women’s Doubles), and China (Men’s Singles), Denmark (Mixed Doubles) and USA one each. 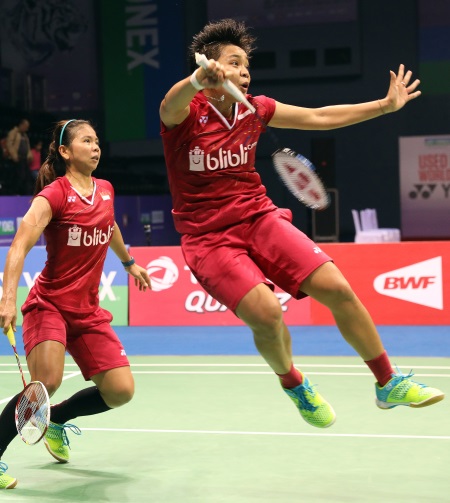 The day ended the way it began – with a display of sheer grit. It was grit that saw Indonesia’s Greysia Polii and Apriyani Rahayu close out the Women’s Doubles final 21-18 21-15 against Thailand’s Jongkolphan Kititharakul/Rawinda Prajonjai. The two Indonesians brought their intense physical energy on to the court, constantly seeking openings with jump smashes, and keeping up the intense hard work until a crack appeared at the other end.

The Thais were equal to the task for the most part, and their defensive stonewalling meant that the Indonesians had to work interminably. The Indonesians laid siege and the Thais held their fortress well; with each rally getting progressively longer. The average number of shots per rally in the first game touched 20; incredibly, it just kept getting higher. Early in the second a rally touched 62 shots; then, astonishingly, 106. What worked for the Indonesians was their refusal to let up, and with both Polii and Rahayu shouldering the burden of hitting from the back, the Indonesians were the ones setting the terms.

Finally, when the citadel fell, it all came down rather quickly. The Thais fell from 14-16 to 14-18 thanks to four straight errors, and the Indonesians found that all the spade work paid off handsomely at the very end. It had taken close to an hour for the Indonesians to get hold of their first title of the year.

“We had to have the will to get each point; we tried not to think of the result,” said Polii. “I knew we had to fight all the way, I said to her – ‘you’re still young, you’re still strong’; I tried to boost up our energy to survive the long rallies.

“We know we’re far from achieving our desired results, there are many other tournaments coming up. We want to take this positively and take confidence from this. At the same time, we cannot be satisfied. It’s wonderful to win here.”

Three in a Row 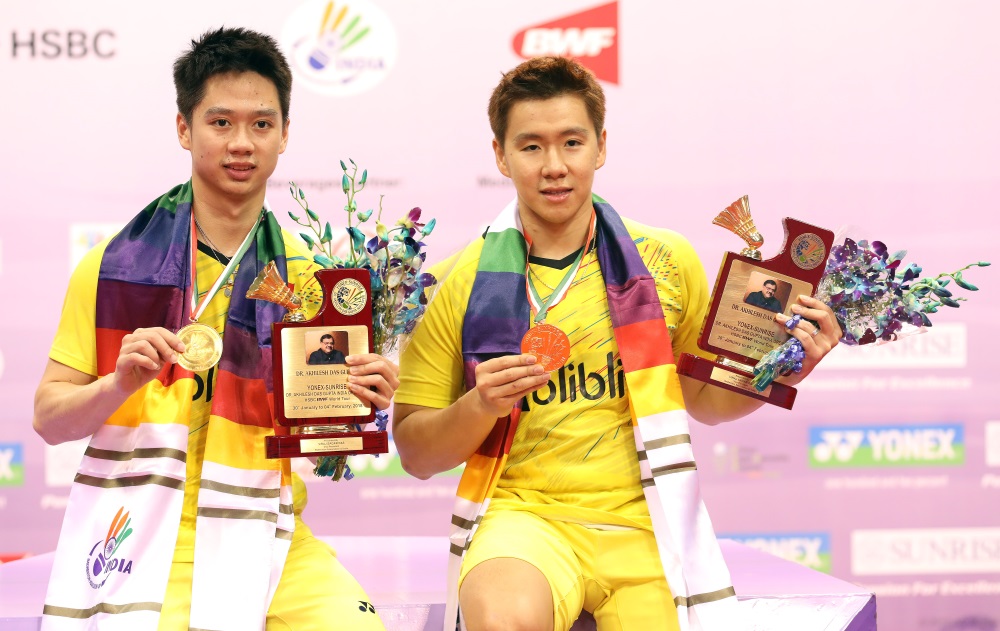 Their compatriots in the Men’s Doubles final, Marcus Fernaldi Gideon and Kevin Sanjaya Sukamuljo, needed a little more than half that time against Denmark’s Kim Astrup/Anders Skaarup Rasmussen for their third straight India Open.

With a series of quick-fire interceptions and electric moves around the court, the Indonesians extended the winning streak to nine from eleven finals that started at the All England last year. The Danes were fighting with their backs to the wall from the beginning; there was simply no let-up from their rampaging opponents. Sukamuljo, true to style, played some outrageous shots and just got bolder with every point. It was all over in 38 minutes for the Danes, as they went down 21-14 21-16.

The day didn’t entirely go Indonesia’s way. Sandwiched in between the above two matches was the Mixed Doubles final between Denmark’s Mathias Christiansen/Christinna Pedersen and Praveen Jordan/Melati Daeva Oktavianti. 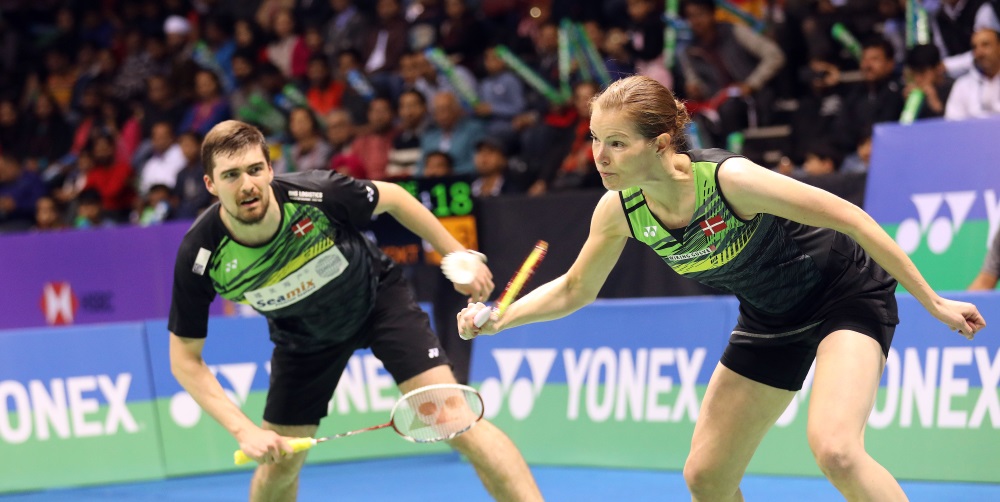 Christiansen and Pedersen were barely troubled by their opponents. The main threat for the Danes was Jordan’s rasping hits, but Pedersen’s defence was up to the challenge today, and she repelled whatever was thrown her way. The Danes wrangled the early initiative and kept it that way all through the match. The 21-14 21-15 result gave the Danes their first title together since they came together in late 2017.

“We got third time lucky after losing two finals,” said Christiansen. “We played very well today. It gives us confidence; I hope other pairs fear us a little bit.”

His partner added: “We knew that if we play too slow, we would be defending against them. Our tactic was to attack the front court and that worked well today.” 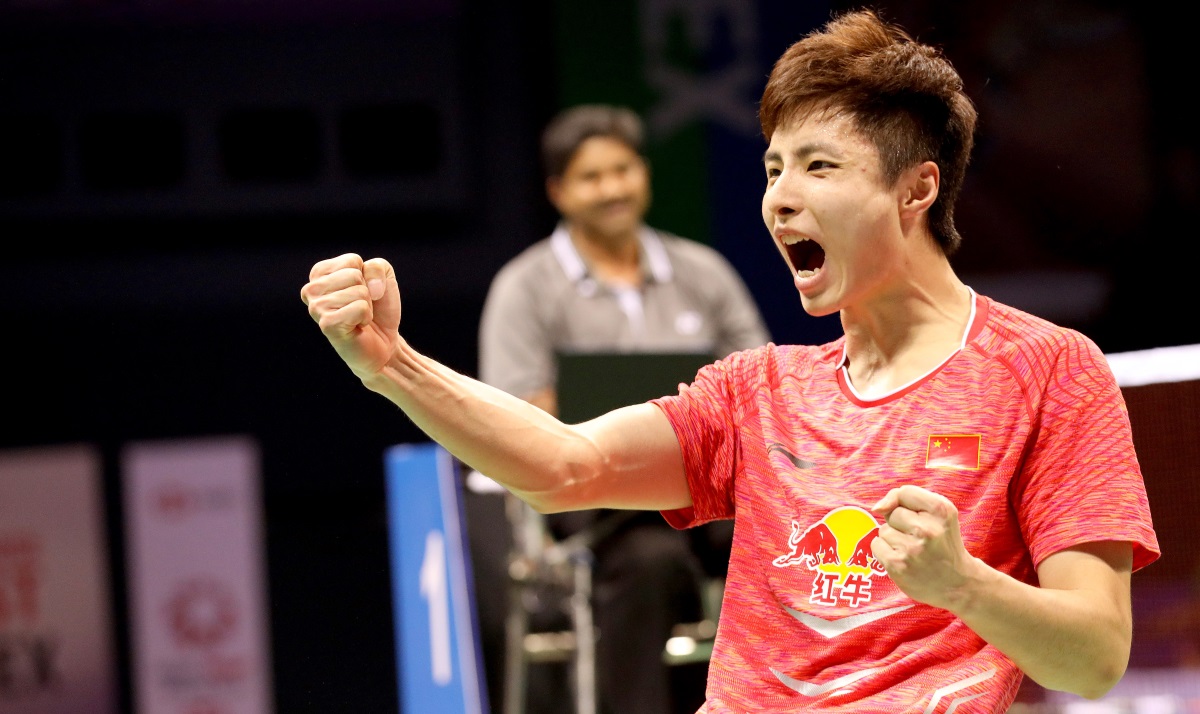 Shi Yuqi broke a long spell without a major title with a disciplined display against Chinese Taipei’s Chou Tien Chen, 21-18 21-14.

Shi had played a draining semi-final yesterday against Malaysia’s Iskandar Zulkarnain, but showed little sign of it. The Chinese trailed early with Chou setting a quick pace and smashing precisely, but Shi slowly worked his way in. With his defence getting tighter, Chou was forced to go ever closer to the lines. A disguised drop shot gave Shi the first game, and with the quality of his defence showing no let-up, Chou’s shoulders fell. The end came quickly, 21-18 21-14 for Shi in 47 minutes.

“It’s my first title after a long time; I hope to win many more,” said Shi. “I studied Chou’s match against Qiao Bin. Today there were a lot of long rallies, I’m glad I could keep my focus. When I caught up, Chou became slightly nervous so it became easier for me.”

Chou acknowledged that he was unable to sustain his early momentum: “His finish was better than mine. I tried to push him, but on every shot he was faster than me. He was more focussed.

“He was more focussed. It was very hard on court. I thought I could fight it to the third game. I think I need to get lucky. He got a few net cords, so it was difficult to play at the net.”