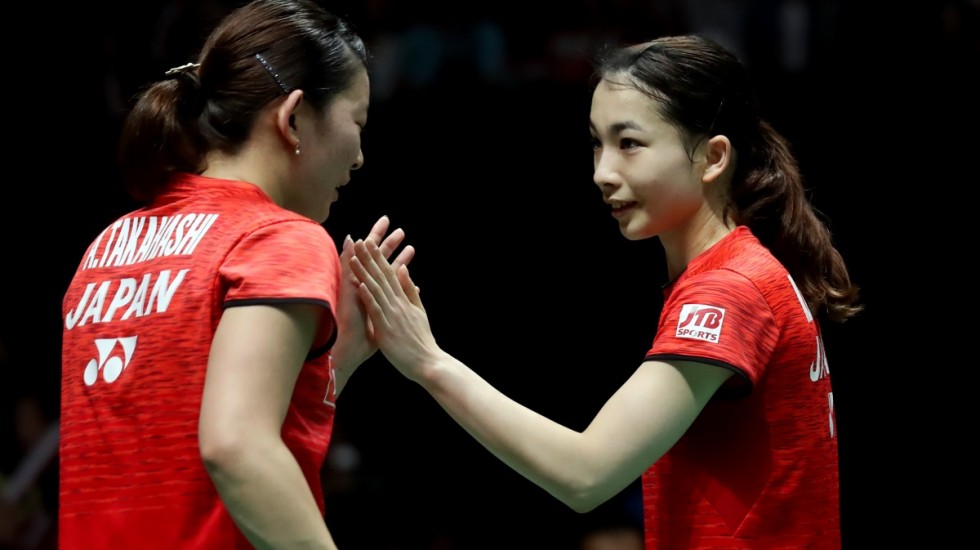 they clinched the Daihatsu Indonesia Masters 2018 yesterday in Jakarta.

The Japanese Women’s Doubles duo’s last title triumph came at home in the Japan Open. Since then they’ve had modest results, and have even been eclipsed by compatriots Yuki Fukushima/Sayaka Hirota and Shiho Tanaka/Koharu Yonemoto. However, in Jakarta they stormed back to their winning ways, with a semi-final victory over Christinna Pedersen/Kamilla Rytter Juhl (Denmark) setting up a chance for their first title in over four months. In yesterday’s final, they held off home pair Greysia Polii/Apriyani Rahayu in 48 minutes, 21-17 21-12.

Indonesia were in four finals and managed to win two. Anthony Ginting won his first title since last year’s Korea Open in September; the local star was dominant in the Men’s Singles final from the start against Japan’s Kazumasa Sakai, whose challenge fell apart in just 33 minutes, 21-13 21-12. Mixed Doubles World and Olympic champions Tontowi Ahmad/Liliyana Natsir were up next, and despite the full-throated support of the crowd, failed to get going against in-form Chinese Zheng Siwei/Huang Yaqiong. Zheng Siwei, incredibly, was in his 11th final from his last 11 tournaments, either in partnership with Chen Qingchen, or Huang Yaqiong. Zheng and Huang have now won four of their five tournaments – the only title to elude them being the Malaysia Masters earlier this month. On Sunday, Zheng and Huang accelerated from 10-all in the first game and were unchallenged from then on, wrapping up the match against Ahmad/Natsir 21-14 21-11 in 33 minutes.

After Matsutomo/Takahashi denied Indonesia a second title, it was left to Marcus Fernaldi Gideon and Kevin Sanjaya Sukamuljo to satisfy their home audience. The most successful Men’s Doubles pair last year once again rose to the challenge after losing the first game to China’s Li Junhui/Liu Yuchen, closing out the match in just under an hour, 11-21 21-10 21-16. Earlier, in the first match of the day, the Women’s Singles, Saina Nehwal once again failed to breach the Tai Tzu Ying fortress. India’s Nehwal had lost six matches in a row to the Chinese Taipei maverick going into Sunday’s final, and she fell short yet again, as Tai stormed to a 21-9 21-13 victory in just 27 minutes.