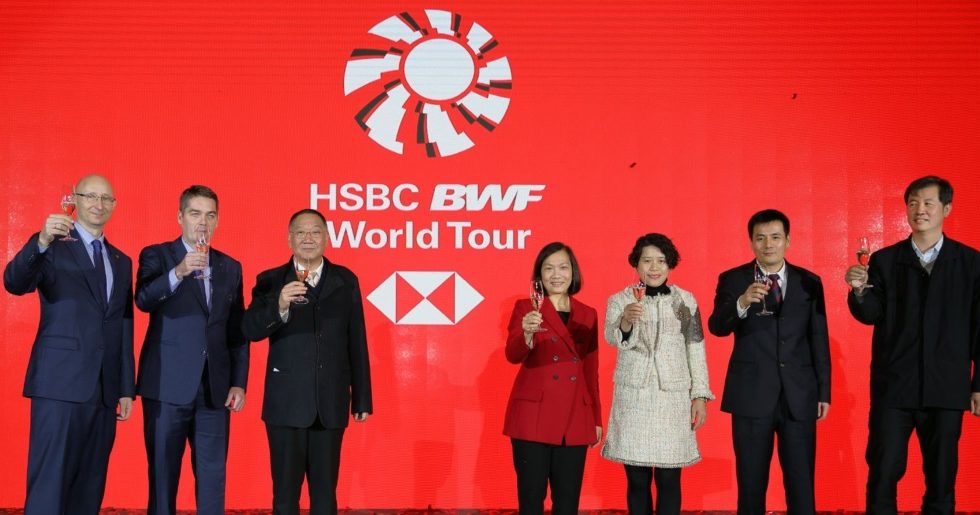 In a landmark announcement, the Badminton World Federation (BWF) today launched its remodelled world tour and presented HSBC as its Principal Global Partner in an extensive sponsorship agreement that will catapult badminton to unprecedented heights.

The global banking group will have a corporate presence across BWF’s entire suite of events – title-sponsoring the new HSBC BWF World Tour and the HSBC BWF World Tour Finals for the next four years as well as becoming Premier Sponsor for the BWF Major Events (World Championships, Sudirman Cup and Thomas & Uber Cup Finals).

On the development front, HSBC has been named as BWF Global Development Partner, working with the world-governing body to grow badminton globally.

Neatly wrapped around these details was the presentation of the polished and evolutionary tour branding, including the titles of the different tour levels; unveiled to media and industry colleagues at a launch event and press conference in Guangzhou this afternoon. The international federation revealed that Guangzhou will be home to the HSBC BWF World Tour Finals for the 2018-2021 tournament cycle; a fitting location given badminton’s prominence in China and HSBC’s focus on the Pearl River Delta region. Welcoming HSBC to the BWF’s global family, BWF President Poul-Erik Høyer said: “This is a significant milestone in our federation’s history. We are stepping boldly into the future with a partnership that will define badminton for the ages.”

“HSBC enjoys a cachet that is the envy of the banking world. It has distinguished itself across the panorama of sport as a brand of excellence – a brand with which BWF is proud to partner.

“We are partnering with HSBC because we are committed to being the world’s sport.”

Helen Wong, Chief Executive Greater China of HSBC, said: “HSBC is excited to help grow this popular sport across Asia and beyond, through this global partnership with the BWF. Supporting the new HSBC BWF World Tour, we hope to develop deeper relationships with athletes, fans, customers and employees on every stop, including here in Guangzhou.

“The Pearl River Delta is an important market for HSBC and it’s great to see Guangzhou being celebrated as the new home for the HSBC BWF World Tour Finals. Through this partnership, we look forward to supporting badminton at all levels.” The BWF also took the opportunity to present the Chinese Badminton Association and the city of Guangzhou – represented by the Guangzhou Sports Bureau – as key partners of the HSBC BWF World Tour Finals – the signature, year-end finale for which only the cream of the crop qualify.

“China is a crucial badminton market and we are pleased to entrust one of our flagship tournaments – indeed the pinnacle of the tour season – to Guangzhou for the next four years. We appreciate the cooperation which we have received in launching this partnership and we look forward to working closely with the Chinese Badminton Association and the Guangzhou Sports Bureau to deliver an event of the highest calibre,” said Høyer.

“It’s Guangzhou’s honour to host the Finals. It is a big responsibility and we will give our best with the assistance of BWF and CBA and with the public’s support. We will strive to have the best facility, organisation and service to ensure the tournament’s success.

“Badminton is a traditional sport in Guangzhou. The city has had eight World champions and two Olympic champions. There are millions of people learning badminton in Guangzhou and we hope more people will start playing badminton.”

Secretary General of the Chinese Badminton Association (CBA), Lei Jun, stated the Chinese badminton community is very proud to be entrusted with the HSBC BWF World Tour Finals and pledged to uphold the high standards which are associated with the season finale.

“It is an honour for China to be the guardians of the new HSBC BWF World Tour Finals. This is an exciting time and we look forward to working with the city of Guangzhou, BWF and HSBC to ensure a spectacular event for our top players.”

Meanwhile, BWF Secretary General Thomas Lund said the potential to increase badminton’s global presence, broadcast coverage and the popularity of elite players – under one umbrella brand – was a major catalyst in the decision to merge and rebrand BWF tournaments.

“Our objective was to evolve all our events into a unified, distinctive brand that will strengthen brand awareness and value. This will make it possible to improve the quality of the events while making the tour more financially beneficial for hosts and players alike,” he explained.

The purpose and objectives of BWF include regulating, promoting, developing and popularising the sport of badminton throughout the world and organising, conducting and presenting international events at the highest level.

The BWF’s vision is to make badminton a leading global sport accessible to all – giving every child a chance to play for life. Its mission is to lead and inspire all stakeholders; to deliver entertainment through exciting events to drive fan experience, and to create innovative, impactful and sustainable development initiatives.

BWF has its headquarters in Kuala Lumpur, Malaysia, with 189 member associations worldwide.

Poul-Erik Høyer is the BWF President and Thomas Lund is the BWF Secretary General.

HSBC Holdings plc, the parent company of HSBC, is headquartered in London. HSBC serves customers worldwide from approximately 3,900 offices in 67 countries and territories in our geographical regions: Europe, Asia, North America, Latin America, and Middle East and North Africa. With assets of $2,526bn at 30 September 2017, HSBC is one of the world’s largest banking and financial services organisations.